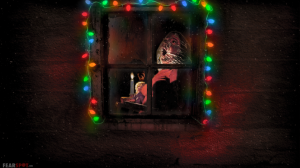 I’ve been meaning to write a short holiday/horror story for years (don’t get excited, I still haven’t) but you might get the gist of where I want to go with it below, to be titled: The List.

With the list completed, he looked it over twice, and then a third, fourth and fifth time, hoping with each repetition he’d find that what he’d written with a shaky hand had been a mistake. How could this be? There was an extensive list of infractions with an entire year for him to find just one to levy against the boy, but somehow the son eluded each and every one. As a matter of fact, the boy had even gone out of his way to add a few genuinely good deeds to his list of accomplishments.

Normally the jolly old man would even overlook several bouts of naughty behavior, but in this instance he only needed one reason to avoid this dreaded trip. Try as he might, he couldn’t find a hint of naughtiness in the boy all year, and despite all the lies, torment and death the son of the devil may have dished out in the past, each year a fresh slate is given to all the boys and girls, and this one is clean.

He checked it five fucking times.

He found out who was naughty and nice.

Santa Claus is coming to hell.

10 People you don’t want to invite to Christmas dinner.

Just in time for the holidays, I present a list of ten “people” (in no particular order) that you don’t want to invite to Christmas dinner.

You might be wondering whether or not to invite that annoying uncle that no one likes, or that relative that just can’t seem to hold their alcohol without making a complete asshole of themselves, but just remember, it could always be worse. Now there’s some obvious answers like Hannibal Lecter or the Creeper, but who’s seriously going to invite a convicted murder/cannibal, or a creature that meticulously selects specific pieces of the human anatomy to consume for 23 consecutive days, to Christmas dinner? Obvious bad choice is obvious. No, it’s the quiet ones you have to watch. END_OF_DOCUMENT_TOKEN_TO_BE_REPLACED