A decade ago, a little horror gem slipped by far too many people, and that was Brad Anderson’s Session 9, which received an all too limited theatrical release in August 2001. I had a few other movies in mind to use for my first retro review on the site, but in celebration of the 10 year anniversary, I figured I’d bring some attention to this wonderful, underrated film, as I just re-watched it a few days ago and was reminded that not enough people are aware of it’s existence.

For those who are unaware, Brad Anderson is the director of another wonderful psychological horror film, The Machinist, released 3 years after Session 9 and also criminally limited in its theatrical run. But Session 9 remains my favorite from Anderson, and so I bring you my review… 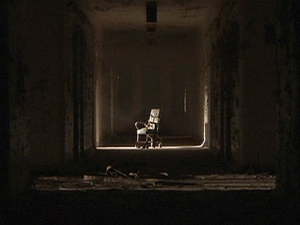 Story: The film centers around an asbestos cleaning crew who’s taken on the daunting task of finishing their work in an abandoned mental hospital within a weeks time to keep their company from folding. But the hospital has a dark, horrific past that seems to be awakening as tensions rise among the crew. I won’t dive any deeper in fear of spoiling things for those who still haven’t seen it, but I’ll say that the story and characters are more than sufficient to get the job done right. It keeps you on the edge of your seat, gradually building in mood, fear and intensity, with two more questions being added with each answer, and you’ll actually care about where it’s going because you’ll care about the characters. 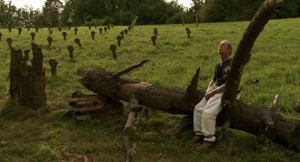 Directing: Brad Anderson knows what he wants and it comes off in every frame with a unique style he’s carried over into later films. Each shot and camera movement is well orchestrated, and few horror directors working today are as good at creating mood and psychological tension like him. There’s a mounting weight of insanity that envelops the asylum and its history, and you can feel it seeping into each character’s bloodstream as the film progresses, not unlike The Shining. Anderson does a brilliant job of orchestrating multiple situations that all lead toward the same end, and as the film returns to these scenes over and over, the observant viewer will pick up on the subtleties and this is where the film begins to shine even brighter among its dark corridors. All-in-all the directing and editing, especially for a first horror film, is top notch throughout.

Acting: Peter Mullan‘s portrayal of Gordon is perfect. He plays the worn down, burned-out-by-life character so well that I nearly tear up whenever I hear the desperation in his voice and see it in his face. And David Caruso delivers most of my favorite lines from the film, keeping that balance of realistic and fun dialogue in the way only he can. I absolutely love him in this film. The rest of the supporting cast and characters are equally great, from the spiteful, girlfriend-stealing character of Hank, to the law school graduate who becomes obsessed with case files and the audio sessions that give the film its name. A few lines of dialogue by Gordon’s nephew are a bit questionable in their delivery, but stop short of being too cringe worthy. It’s a worthy cast of not so well known actors who add another great element to a great film.

Audio: I can’t say enough about the eerie score by Climax Golden Twins. Far too many films come out of Hollywood with a generic soundtrack that simply blends into the background and is simply “there”. It doesn’t stand out and it doesn’t increase fear or mood. This is not the case with Session 9. The soundtrack alone, without taking the dark, chilling environment or scenarios into account, can instill fear and unease. There’s a brilliant blend of sounds and voices mixed into the music and the end result is a soundtrack that almost serves as a character of its own. I may be talking up the soundtrack a little too much, but I’ve always been a fan of scores that do things a little different, like John Carpenter or Goblin. Session 9 is a different animal than those examples, but either way it’s far from boring or generic.

Dread: Session 9 is scary! There are countless films that claim to scare the panties off us, but very few that can get the job done and then follow through with penetrating our fears. Just an image of a wheelchair at the end of a gloomy hallway is enough, but when it’s situated next to room with a dark history and is shot with the slow, deliberate mood Anderson is so good at delivering, it shifts from “a little creepy” to “scary as hell”. It takes a lot to scare me, and by that I don’t mean cats jumping out of cupboards accompanied by orchestra hits. I’m talking chills up and down my spine just recalling scenes from the film (The Changeling with George C. Scott is still getting fat off this cake). I can count the amount of films that pull this off regularly on far too few fingers, but Session 9 earns a place on my hand.

Recommendation: I’d recommend Session 9 to anyone who enjoys the genre and especially those who enjoy ghost stories, abandoned places and psychological horror. It’s one of the better horror films to come out in the past 10 years and cemented Brad Anderson, at least in my eyes, as one to keep a close eye on. So far his portfolio has not disappointed me. Void of sex, nudity and CGI, this film hones in on its job and the result is a breath of fresh air that gets better with each viewing.

This entry was posted on Tuesday, August 30th, 2011 at 12:45 PM and tagged with Brad Anderson, horror, movie, review, session 9 and posted in Film Reviews. You can follow any responses to this entry through the RSS 2.0 feed.
« The good, the bad, and the remake.
The Man With a Thousand Wounds (excerpt from Dōguhn) »